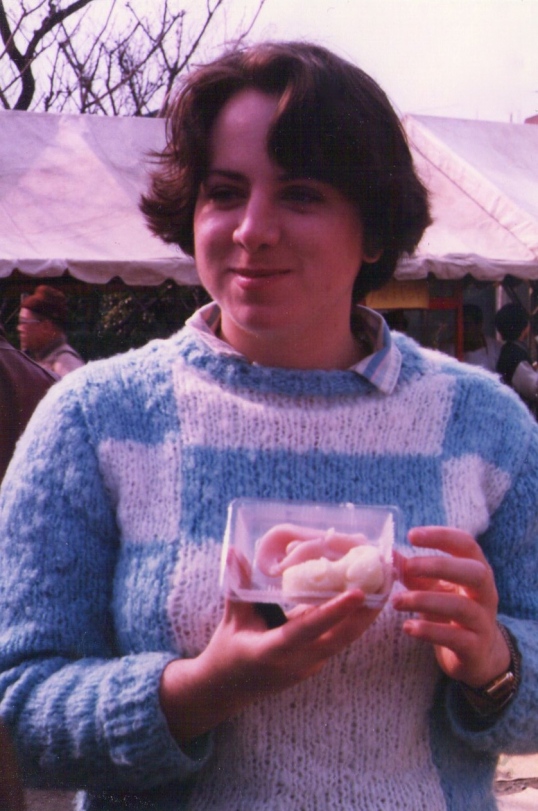 This is me at Kanamara Festival in Kawasaki, Japan, 1984

Back in 1984, I was less than one year graduated with a B.Ed. from the University of British Columbia.  Politically, things were tough for teachers and the best I had been able to do was to find work as a substitute teacher.  On a good week I would get two days of work, a bad week was nothing.  I began to apply for jobs anywhere in Canada – tiny towns, big cities, northern towns.  I even applied for a job in Fort McMurray.  400 miles north of Edmonton.  -54 in the winter.

I didn’t even get short-listed there were so many applicants.  Out of desperation I started applying all over the world.  On January 31st, I was hired to teach ESL in a language school in Tokyo and I had 2 weeks to get there.  The trip to Tokyo was long and extremely eventful and perhaps one day I will tell the story here in this blog, but for tonight suffice it to say that after much tribulation I arrived in Tokyo and was introduced to the staff at Berkeley House Language School in their Ichigaya campus.  I had fallen on my feet!  I began working with a great bunch of people from Canada, the US and England.  We were all far away from home, all in our twenties, all single, and all bent on having a good time.  Frequently, this meant drinking our brains out, climbing on the last train and regaling all of the tired Japanese businessmen with songs from home.  Now as I look back with the wonder of the 20/20 vision hindsight gives us, I realize just how freaking obnoxious we all were when we were drinking.  Not to say that drunken Japanese businessmen couldn’t be every bit as obnoxious, but we were, after all, guests in their country.

Now, occasionally we would find some other way to occupy our spare time that was, perhaps, slightly less offensive.  In April, one of my coworkers asked me to join her for the Kanamara Matsuri in Kawasaki, just south of Tokyo.  It sounded fun and I had no plans for the weekend so off we went.  I had only been to one other festival – a rather tame and quiet plum blossom festival.  I assumed this would be similarly quiet.  Oh, not so Hiroshi!  We stepped down from the train platform to hear raucous crowds making their way up and down the streets.  We were pulled along in the tsunami of humanity heading toward the shrine. 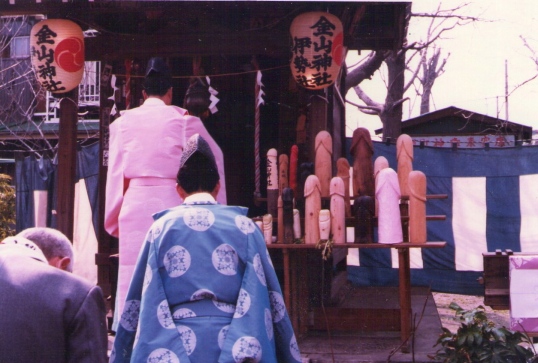 Once we entered the shrine grounds we were surrounded by giant penises, tiny penises, wooden penises, steel penises, every kind of penis you can imagine.  Including very large wooden penises that women were supposed to straddle and shuffle there way from one end of the penis to the other (no symbolism there!) in order to become more fertile.  The front of the shrine was festooned with carved penises (or should that be peni?  I don’t know) and women were carrying giant pink penises through the street.  Food stands around the edges of the shrine grounds were full of all kinds of foods shaped into both penises and vaginas.  In fact, if you look at my picture above, you will see that I am holding a candied penis and vagina.

I was flabbergasted.  Never had my prudish mother prepared me for this experience!  After a full day of enjoying the festivities, I returned to my little apartment with a golden papier mache’ phallus that travelled with me for probably the next 15 years.  That was 29 years ago but I can remember it as if it were yesterday (how often is one pulled across a giant wooden phallus by crowds of normally demure Japanese women?).  If you want to see what this festival looks like, click here – but don’t if your sensibilities would be overloaded by crowds of male members.

5 responses to “Festival of the Steel Phallus”